About ASAP Rocky Quotes “Rakim Athelaston Mayers, known professionally as ASAP Rocky, is an American rapper and record producer from Manhattan. He is a member of the hip hop collective A$AP Mob, from which he adopted his moniker. In August 2011, Rocky’s single “Peso” was leaked online and wit 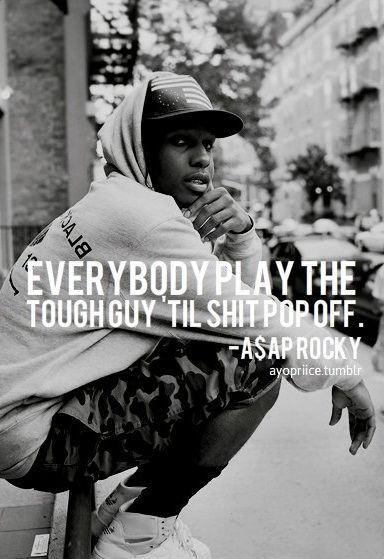 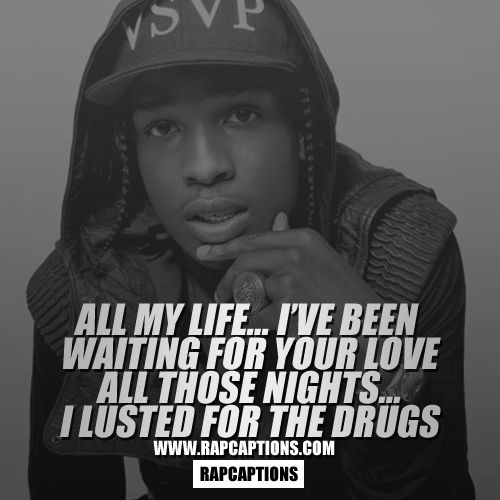 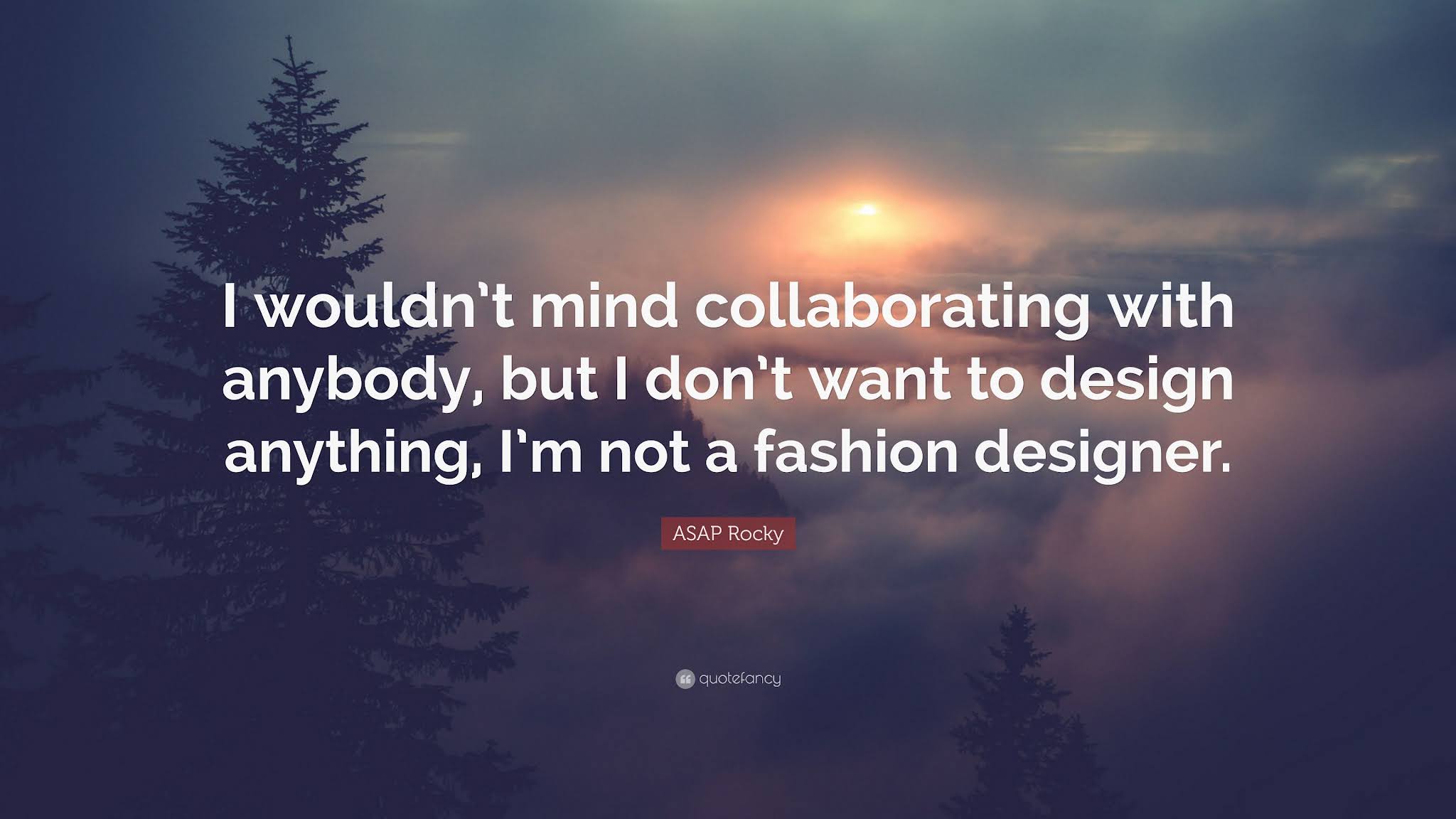 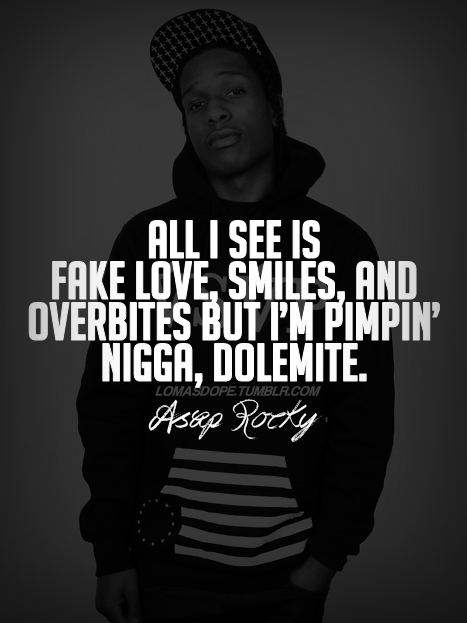 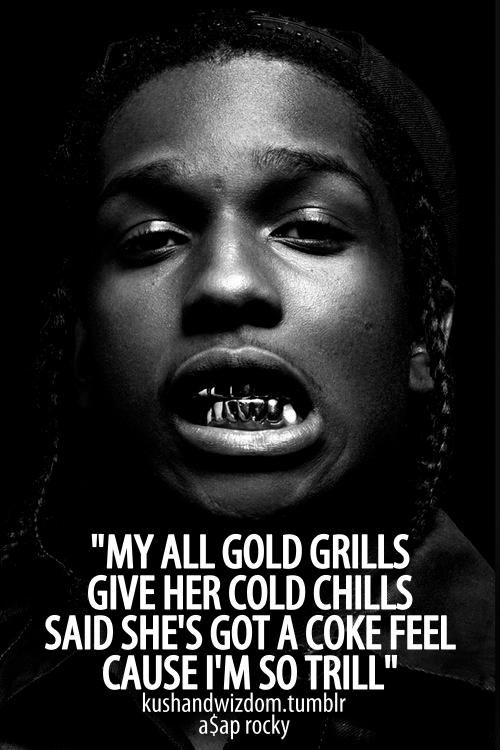 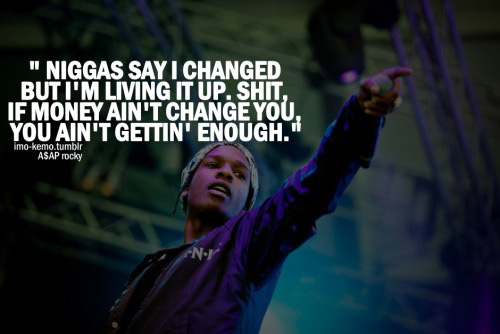 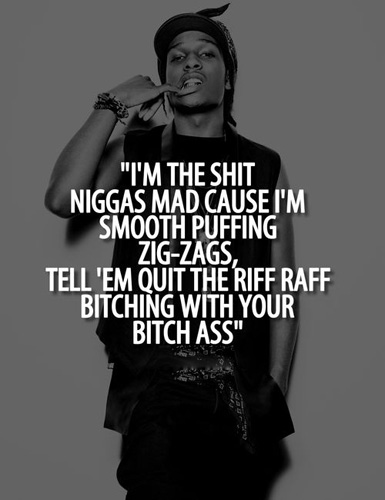 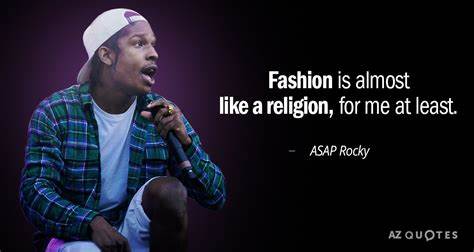 All of the young people – the artsy people, people who get overlooked because they’re weird or they don’t have hype around them – need to get some shine.
ASAP Rocky

I didn’t want to be a loser, but I didn’t want to fit in at the same time because I don’t like just being ordinary. So it’s one of those situations where I always kept my head up.

When Big Meech and everybody got indicted, hustling died. Keep it trill.
ASAP Rocky

Weed is going to bring us together as a generation. Drugs is what created Woodstock. Let’s be clear about that.
ASAP Rocky

“Hold up, bitches simmer down
Takin’ hella long, bitch, give it to me now”

“Acne, my jacket from Sweden (huh)
My chicks don’t exactly know English (what)”

I want to be the first guy to help people accept everybody for who they are. I’m talking about colors, religions, sex, everybody. My music is for everybody, it’s not just for one kind of group.
ASAP Rocky

I want to inspire people to really open up their minds and not be one-sided or biased or hypocritical.
ASAP Rocky

If a chick wants to know who makes my shoes, she’s got to take them off my feet and look inside.
ASAP Rocky

Young boy, let his gun bang, let his nuts hang Transition to a Lamborghini from a Mustang Drugs slang in the drug game with the hustling (I know one thing) Anything is better than that 1 train
ASAP Rocky

There’s just so much out there and so much inspiration… I just want to be tasteful.
ASAP Rocky

I treat everybody equal, and so I want to be sure that my listeners and my followers do the same if they’re gonna represent me. And if I’m gonna represent them, then I also want to do it in a good way.

I dress how I feel. I just go off emotion. I can’t prepare my outfit a day before. Everything I wear is spontaneous.

I’m here to break boundaries, man. That’s all. I’m here to be the first so that the people after me don’t have to think twice about expressing themselves and being free.

But for real, for me, I feel like with the red lipstick thing it all depends on the pair of complexion. I’m just being for real. You have to be fair skinned to get away with that.

Purple lipstick? Naw, that looks stupid on all girls!

I remember one time I went to Craigslist to find something; that’s how bad I wanted it. It was a pair of Raf Simons – this was like 2010. But Raf said he was going to make them for me.

Fashion is almost like a religion, for me at least.

I’m a people’s person, believe it or not. I just have a dark side to me, which we all do.
ASAP Rocky

Nowadays, everybody wanna be weird. We know how to manifest being weird.
ASAP Rocky

I want to make my own path and leave behind a good legacy for myself and honestly, I just want to be innovative and always down for other people. That’s what I want to be remembered by. I want to inspire.

Fashion is almost like a religion, for me at least.
ASAP Rocky

The worst thing a good girl could do to you is break your heart.
ASAP Rocky

I’ve got so much in my brain and I want to change the way we think sometimes.
ASAP Rocky

Design my own line? No, I just like the culture.

I’m not a gay rights activist.

For instance, one big issue in hip hop is the gay thing. It’s 2013, and it’s a shame that, to this day, that topic still gets people all excited. It’s crazy. And it makes me upset that this topic even matters when it comes to hip hop, because it makes it seem like everybody in hip hop is small-minded or stupid – and that’s not the case.

For me, growing up in Harlem and then migrating down to SoHo and the Lower East Side and chillin’ down there and making that my stomping ground… That was a big thing, because I’m from Harlem, and downtown is more artsy and also more open-minded. So I got the best of both worlds.

There was a time when someone would get on a plane and request to move their seat just because the person sitting next to them was of a different ethnicity or religion or nationality. But I don’t think my generation wants that. That’s how it used to be.

I really want to do the unexpected, and I think that’s what I did when I executed ‘Long.Live.A$AP.’ I wanted people to really see the message and that I’m an artist who not only has the capability of rapping, but of composing great music both for people of my generation and for people with different backgrounds.

I wanted to model when I was younger.

I thought highly of myself growing up. I still do. There’s not really much somebody can say to me to bring down my confidence or anything.
ASAP Rocky

I dress how I feel. I just go off emotion. I can’t prepare my outfit a day before. Everything I wear is spontaneous.

60 Most Famous Arthur Conan Doyle Quotes for you