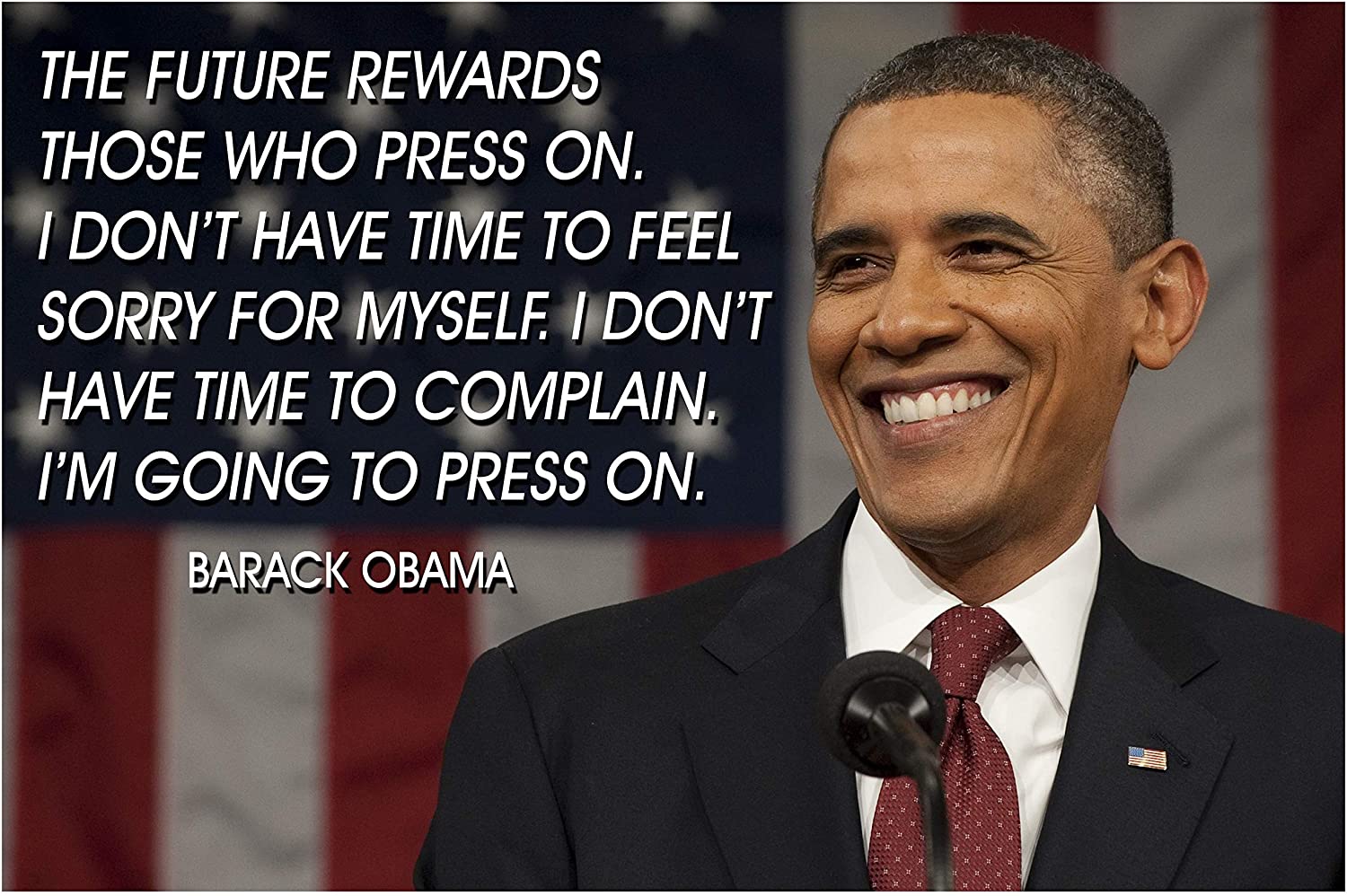 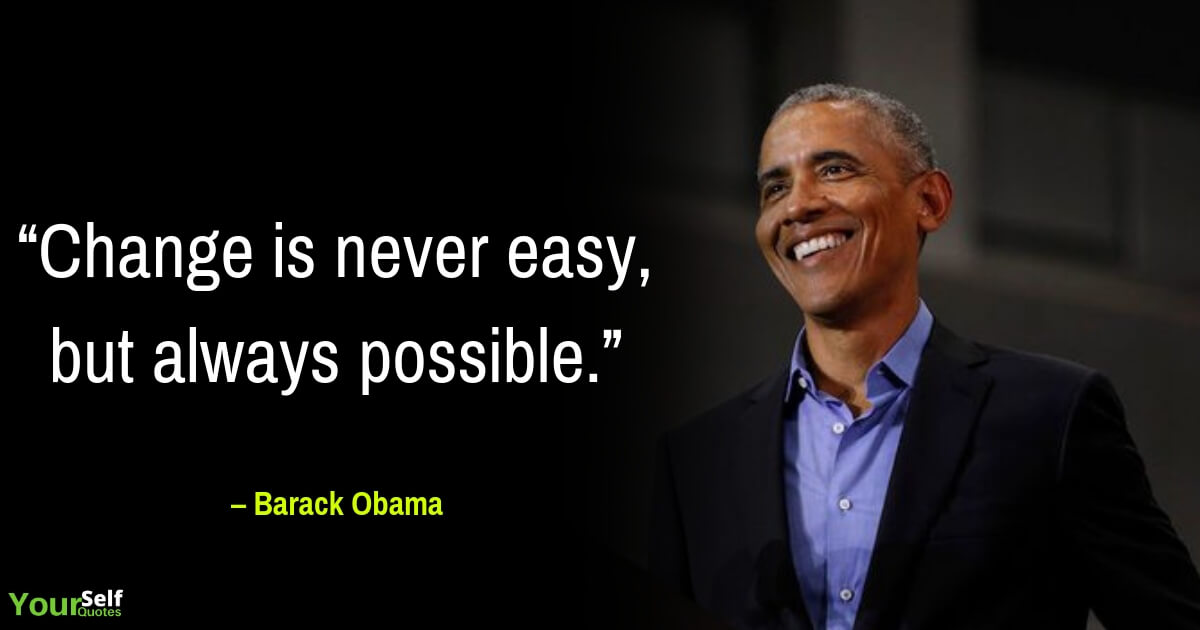 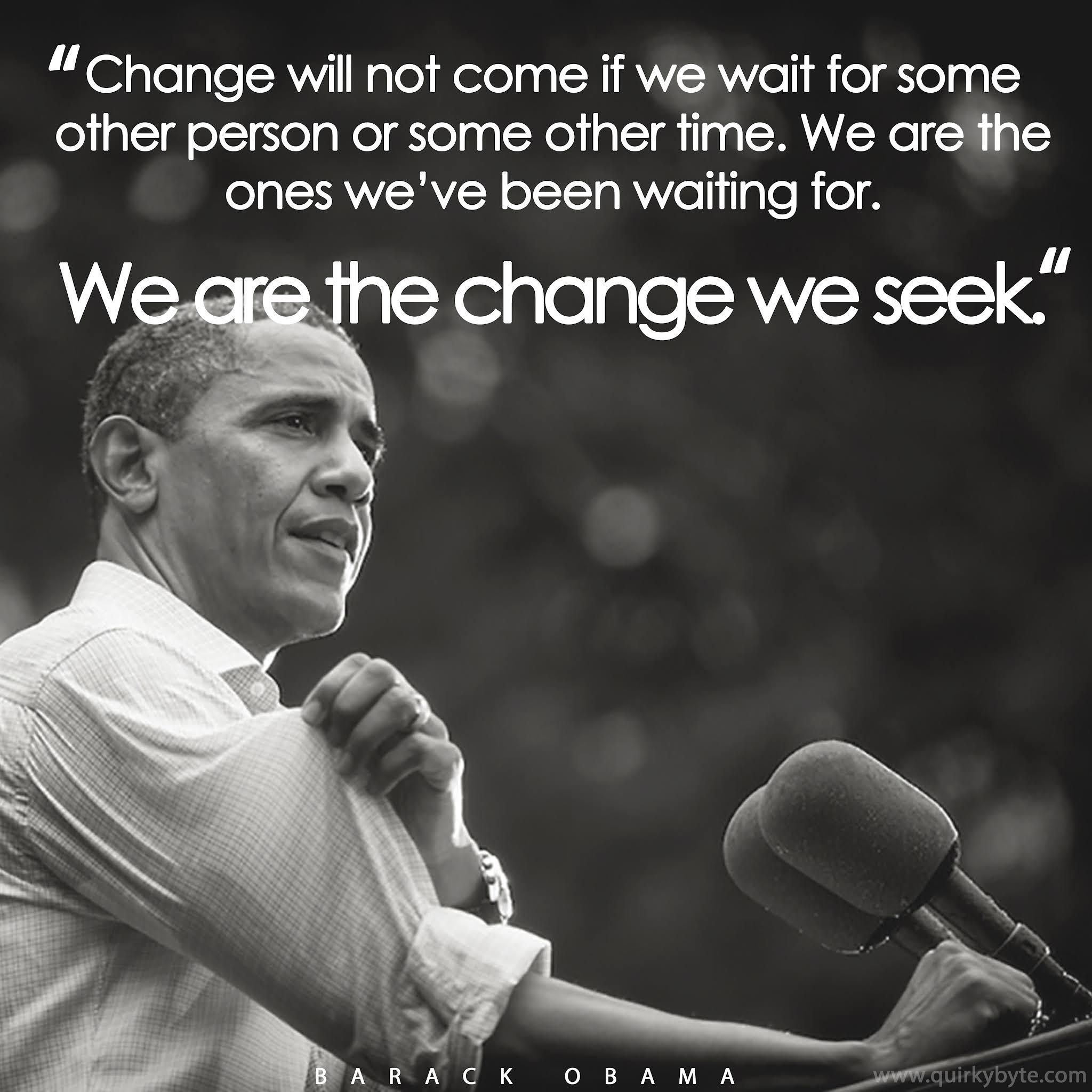 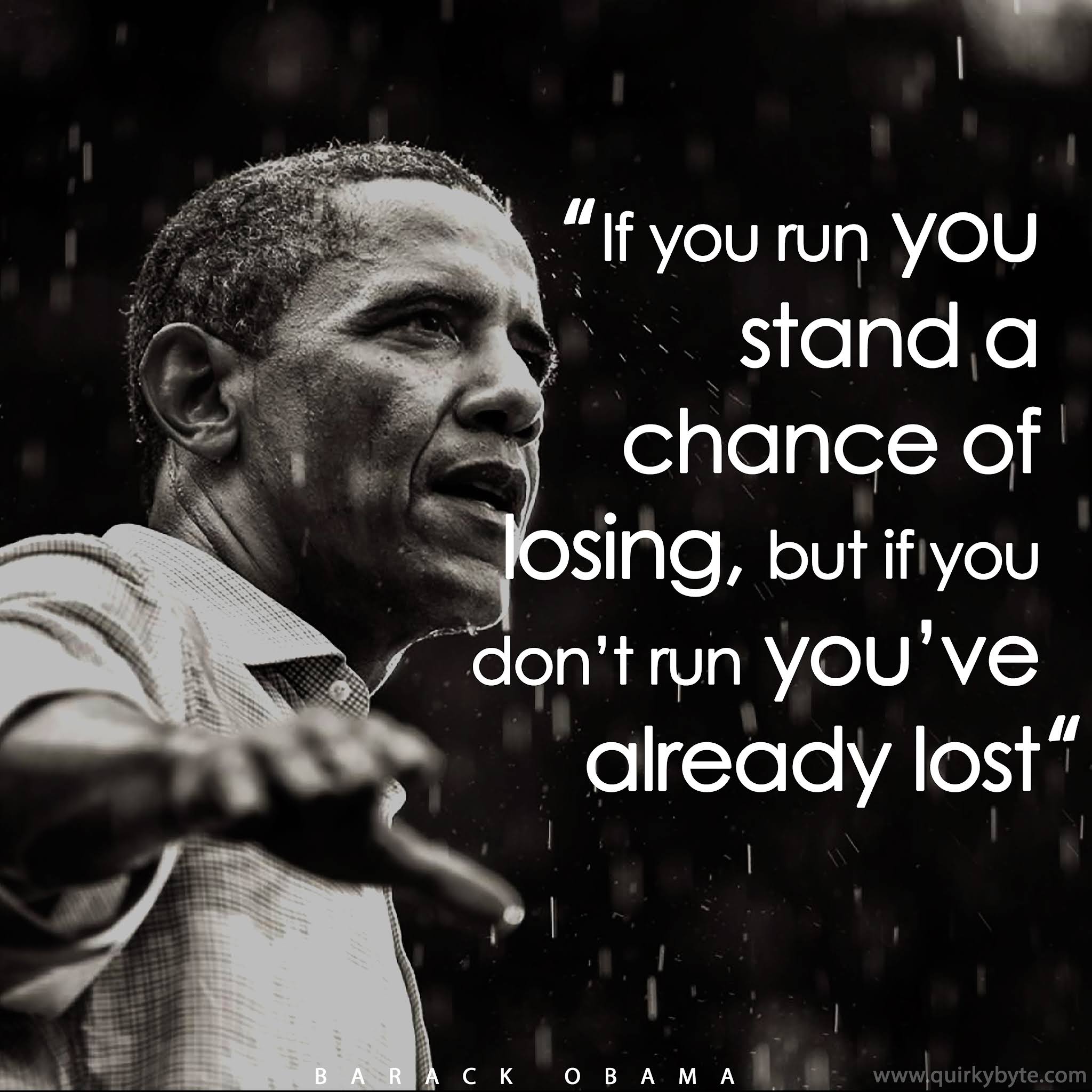 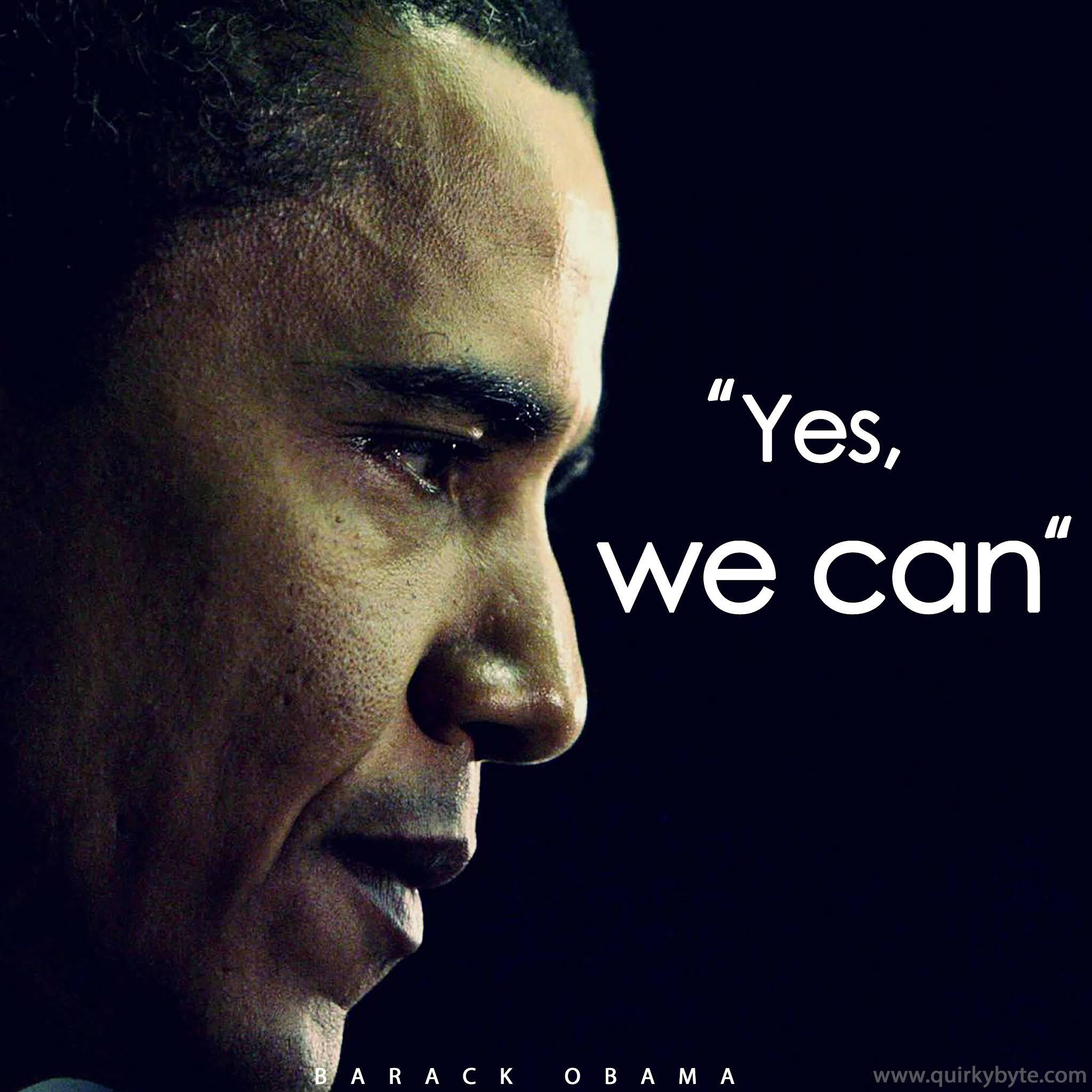 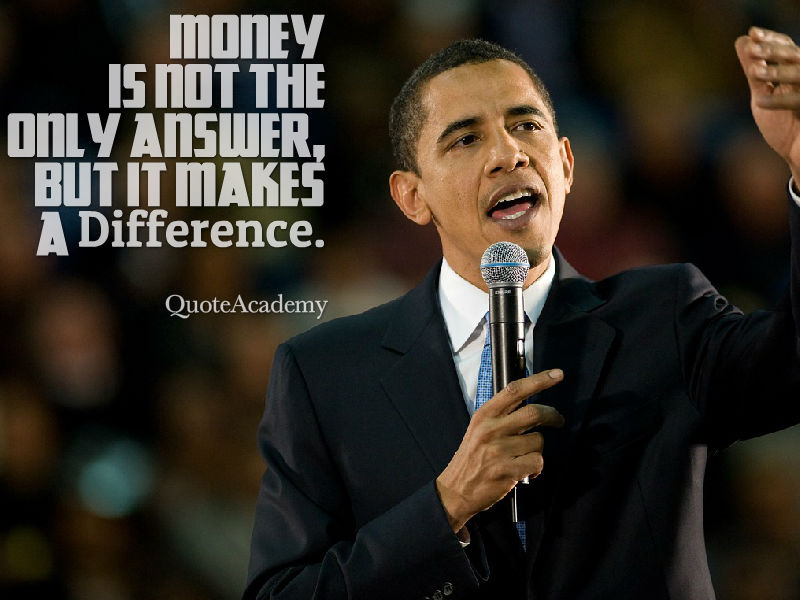 “We as a country have to do some soul-searching.”
— Barack Obama

“Winston Churchill used to say that we, Americans, try every other option before we finally do the right thing. After everything else is exhausted we eventually do the right thing and I think that’s true for Congress as well. And it’s important for Americans to remember that politics has always been messy.”
— Barack Obama

Nothing in life that’s worth anything is easy.

While we breathe, we will hope.

You can put lipstick on a pig. It’s still a pig.

Our stories may be singular, but our destination is shared.

Nothing can stand in the way of the power of millions of voices calling for change.

Our stories may be singular, but our destination is shared.

Focusing your life solely on making a buck shows a poverty of ambition. It asks too little of yourself. And it will leave you unfulfilled.

In the face of impossible odds, people who love this country can change it.

We are the change we have been waiting for.

A change is brought about because ordinary people do extraordinary things.

The best way to not feel hopeless is to get up and do something. Don’t wait for good things to happen to you.

My fellow Americans, we are and always will be a nation of immigrants. We were strangers once, too.

We proved that we are still a people capable of doing big things and tackling our biggest challenges.

Money is not the only answer, but it makes a difference.

“Robin Williams was an airman, a doctor, a genie, a nanny, a president, a professor, a bangarang Peter Pan, and everything in between. But he was one of a kind. He arrived in our lives as an alien – but he ended up touching every element of the human spirit. He made us laugh. He made us cry. He gave his immeasurable talent freely and generously to those who needed it most – from our troops stationed abroad to the marginalized on our own streets. The Obama family offers our condolences to Robinâ€™s family, his friends, and everyone who found their voice and their verse thanks to Robin Williams.”
— Barack Obama

“In Texas, we hold very dear to intrusions against our personal liberty. We fight very hard against that.”
— Barack Obama

“It is now our generation’s task to carry on what those pioneers began. For our journey is not complete until our wives, our mothers and daughters can earn a living equal to their efforts. Our journey is not complete until our gay brothers and sisters are treated like anyone else under the law – for if we are truly created equal, then surely the love we commit to one another must be equal as well.”
— Barack Obama

“To look at the issue of life and abortion, actually we’re moving in that direction where most Americans oppose most abortions.”
— Barack Obama

“We’re going to have to invest in the American people again, in tax cuts for the middle class, in health care for all Americans, and college for every young person who wants to go. In businesses that can create the new energy economy of the future. In policies that will lift wages and will grow our middle class. These are the policies I have fought for my entire career.”
— Barack Obama

“Our founders made it extraordinarily difficult to amend the Constitution.”
— Barack Obama

“The role of citizen in a democracy does not end with your vote.” – Barack Obama

“Money is not the only answer, but it makes a difference.” – Barack Obama

“Focussing your life solely on making a buck shows a certain poverty of ambition. It asks too little of yourself. Because it’s only when you hitch your wagon to something larger than yourself that you realise your true potential.” – Barack Obama

“If you’re walking down the right path and you’re willing to keep on walking, eventually you’ll make progress.” – Barack Obama

“Understand, our police officers put their lives on the line for us every single day. They’ve got a tough job to do to maintain public safety and hold accountable those who break the law.” – Barack Obama

“The thing about Hip-Hop today is it’s smart, it’s insightful. The way they can communicate a complex message in a very short space is remarkable.” – Barack Obama

“Fixing a broken immigration system. Protecting our kids from gun violence. Equal pay for equal work, paid leave, raising the minimum wage. All these things still matter to hardworking families; they are still the right thing to do; and I will not let up until they get done.” – Barack Obama

“We cannot continue to rely only on our military in order to achieve the national security objectives that we’ve set. We’ve got to have a civilian national security force that’s just as powerful, just as strong, just as well-funded.” – Barack Obama

“In the end, this is what this election’s about – do we participate in a politics of cynicism or a politics of hope?” – Barack Obama

“It is time to give Iraqis their country back.” – Barack Obama

“It took a lot of blood, sweat and tears to get to where we are today, but we have just begun. Today we begin in earnest the work of making sure that the world we leave our children is just a little bit better than the one we inhabit today.” – Barack Obama

“We are the ones we’ve been waiting for.” – Barack Obama

“Lincoln – they used to talk about him almost as bad as they talk about me. So democracy has never been for the faint of heart…” – Barack Obama

“We need to make progress on some important issues. Take the sequester – Republicans fell in love with the whole thing, and now they can’t stop talking about how much they hate it. It’s like we’re trapped in a Taylor Swift album.” – Barack Obama

“If we think we can just use the same partisan playbook where we just challenge our opponent’s patriotism to win an election, then the American people will lose. The times are too serious for this kind of politics.” – Barack Obama

“Americans still believe in an America where anything’s possible – they just don’t think their leaders do.” – Barack Obama

“My advisors were a little worried about the new rap entrance music – they’re a little more traditional. They suggested I start with some jokes at my own expense – just to take myself down a peg. I was like, “guys, guys, after four and a half years, how many pegs are there left?”.” – Barack Obama

“What we need in Washington is not more political tactics – we need more good ideas.” – Barack Obama

“Those who have the privilege to serve this country have an obligation to do our job as best we can… that’s why disagreement cannot mean dysfunction… the American people’s hopes and dreams are what matters, not ours.” – Barack Obama

“The notion that we can control the flow of information is obsolete.”
— Barack Obama

“If the Court finds that there is not a state interest in discriminating and showing moral disapproval of homosexuality then we can’t stop equal marriage rights.”
— Barack Obama

“One of my strengths is I have a pretty even temperament. I don’t get too high when it’s high and I don’t get too low when it’s low. And what I found during the course of the presidency, and I suppose this is true in life, is that investments and work that you make back here sometimes take a little longer than the 24-hour news cycle to bear fruit.”
— Barack Obama

“The number of Americans killed since 9/11 by terrorism, it’s less than 100. If you look at the number that have been killed by gun violence, it’s in the tens of thousands. And for us not to be able to resolve that issue has been something that is distressing.”
— Barack Obama

“Long before being nerdy was cool, there was Leonard Nimoy.”
— Barack Obama

“The most frustrated and most stymied it is the fact that the United States of America is the one advanced nation on earth in which we do not have sufficient common-sense, gun-safety laws. Even in the face of repeated mass killings.”
— Barack Obama

“For the sake of our children and our future, we must do more to combat climate change.”
— Barack Obama

“There was never a promise that race relations in America would be entirely resolved during my presidency or anybody’s presidency. I mean, this has been a running thread – and – and fault line in American life and American politics since its founding.”
— Barack Obama

“The Internet didn’t get invented on its own. Government research created the Internet so that all the companies could make money off the Internet. The point is, is that when we succeed, we succeed because of our individual initiative, but also because we do things together.”
— Barack Obama

“Civility also requires relearning how to disagree without being disagreeable. Surely you can question my policies without questioning my faith or, for that matter, my citizenship.”
— Barack Obama

“People don’t expect government to solve all their problems. But they sense, deep in their bones, that with just a slight change in priorities, we can make sure that every child in America has a decent shot at life, and that the doors of opportunity remain open to all. They know we can do better.”
— Barack Obama

“But what we can do, as flawed as we are, is still see God in other people, and do our best to help them find their own grace. That’s what I strive to do, that’s what I pray to do every day.”
— Barack Obama

“The United States is not, and never will be, at war with Islam.”
— Barack Obama

“What is certainly true is that the United States has to have a presence to promote the values that we care about.”
— Barack Obama

“If you’re looking for the safe choice, you shouldn’t be supporting a black guy named Barack Obama to be the next leader of the free world.”
— Barack Obama

“Having the United Kingdom in the European Union gives us much greater confidence about the strength of the transatlantic union and is part of the cornerstone of institutions built after World War II that has made the world safer and more prosperous.”
— Barack Obama

50 Most Famous B F Skinner Quotes

60+ Famous Ayn Rand Quotes for you