About Blaise Pascal Quotes “Blaise Pascal was a French mathematician, physicist, inventor, philosopher, writer, and Catholic theologian. He was a child prodigy who was educated by his father, a tax collector in Rouen. Wikipedia 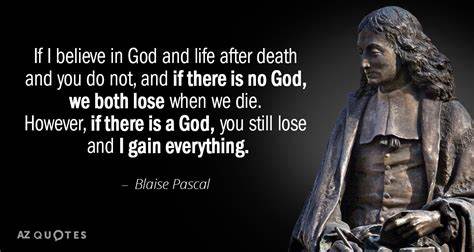 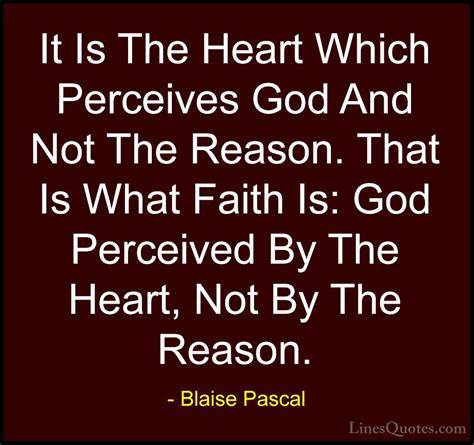 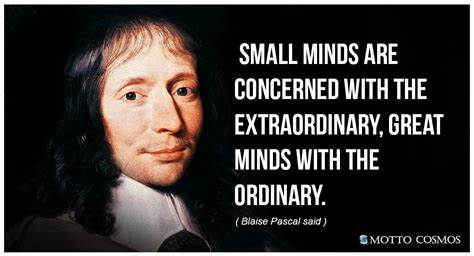 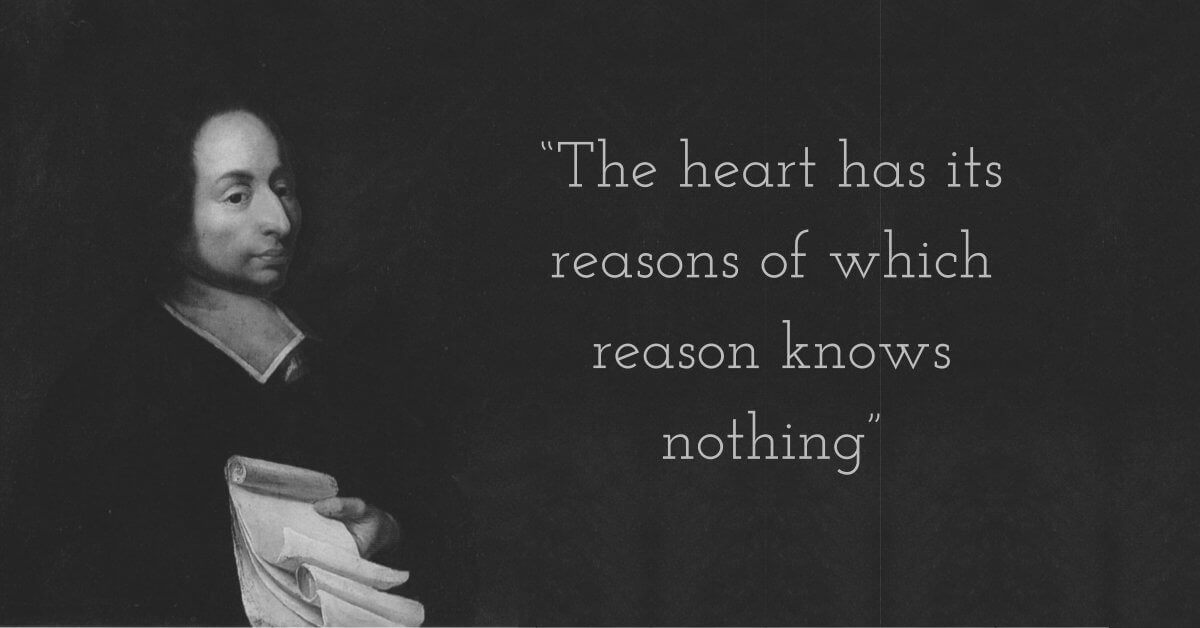 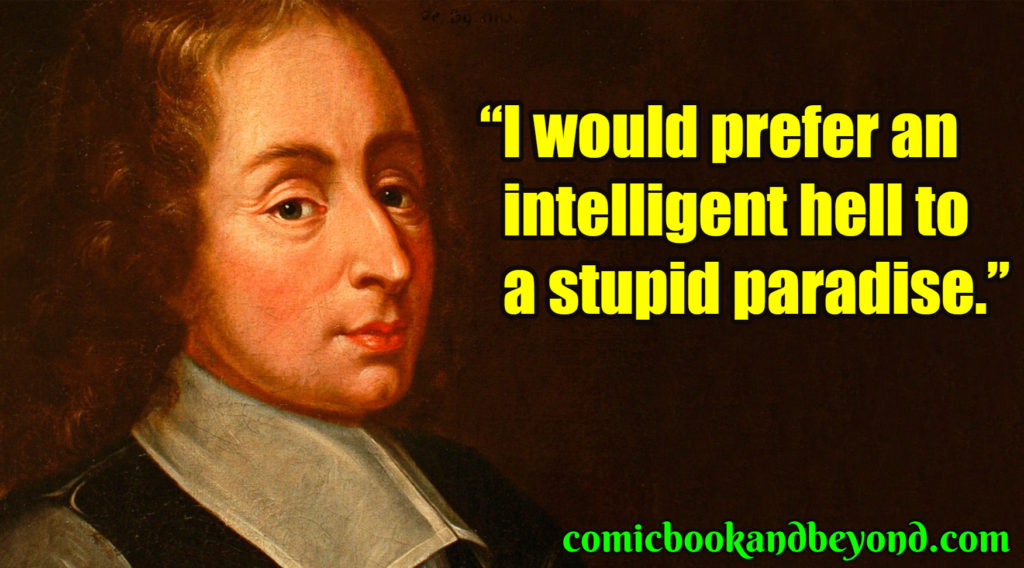 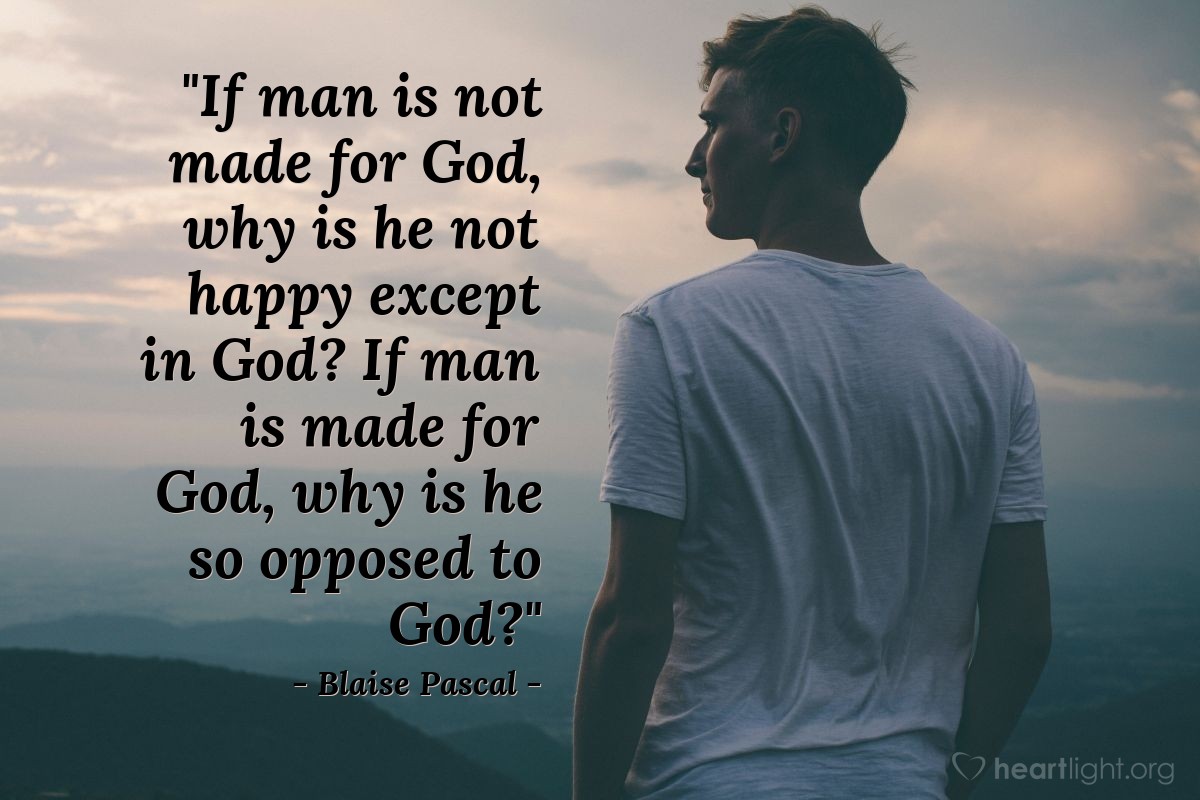 We are usually convinced more easily by reasons we have found ourselves than by those which have occurred to others.

It is the heart which perceives God and not the reason.

Man is equally incapable of seeing the nothingness from which he emerges and the infinity in which he is engulfed.

Our nature consists in movement; absolute rest is death.

Man is full of desires: he loves only those who can satisfy them all. “This man is a good mathematician,” someone will say. But I have no concern for mathematics; he would take me for a proposition. “That one is a good soldier.” He would take me for a besieged town. I need, that is to say, a decent man who can accommodate himself to all my desires in a general sort of way.

We run carelessly to the precipice, after we have put something before us to prevent us from seeing it.

We do not worry about being respected in towns through which we pass. But if we are going to remain in one for a certain time, we do worry. How long does this time have to be?

“The last thing one discovers in composing a work is what to put first.”
— Blaise Pascal, Pensees

“All of humanity’s problems stem from man’s inability to sit quietly in a room alone.”
— Blaise Pascal, Pensees

“Nothing is more common than good things: the point in question is only to discriminate them; and it is certain that they are all natural and within our reach and even known to all mankind.”
— Blaise Pascal, The Art of Persuasion

“As soon as the soul has been made to perceive that a thing can conduct it to that which it loves supremely, it must inevitably embrace it with joy.”
— Blaise Pascal, The Art of Persuasion

“Man is neither angel nor beast, and unhappily whoever wants to act the angel, acts the beast.”
— Blaise Pascal, Pensées and Other Writings

“It is not among extraordinary and fantastic things that excellence is to be found, of whatever kind it may be. We rise to attain it and become removed from it: it is oftenest necessary to stoop for it.”
— Blaise Pascal, The Art of Persuasion

“I have only made this letter longer because I have not had the time to make it shorter.”
— Blaise Pascal, The Provincial Letters

“Men never do evil so completely and cheerfully as when they do it from religious conviction.”
— Blaise Pascal, Pensees

The heart has its reasons of which reason knows nothing.

All men’s miseries derive from not being able to sit in a quiet room alone.

Belief is a wise wager. Granted that faith cannot be proved, what harm will come to you if you gamble on its truth and it proves false? If you gain, you gain all; if you lose, you lose nothing. Wager, then, without hesitation, that He exists.

In faith there is enough light for those who want to believe and enough shadows to blind those who don’t.

If we examine our thoughts, we shall find them always occupied with the past and the future.

Small minds are concerned with the extraordinary, great minds with the ordinary.

Man’s greatness lies in his power of thought.

Truth is so obscure in these times, and falsehood so established, that, unless we love the truth, we cannot know it.

Imagination disposes of everything; it creates beauty, justice, and happiness, which are everything in this world.

Nature is an infinite sphere of which the center is everywhere and the circumference nowhere.

If you gain, you gain all. If you lose, you lose nothing. Wager then, without hesitation, that He exists.

The weather and my mood have little connection. I have my foggy and my fine days within me; my prosperity or misfortune has little to do with the matter.

Kind words do not cost much. Yet they accomplish much.

Thus so wretched is man that he would weary even without any cause for weariness… and so frivolous is he that, though full of a thousand reasons for weariness, the least thing, such as playing billiards or hitting a ball, is sufficient enough to amuse him.

When we are in love we seem to ourselves quite different from what we were before.

I have made this letter longer than usual, only because I have not had the time to make it shorter.

If all men knew what others say of them, there would not be four friends in the world.

All human evil comes from a single cause, man’s inability to sit still in a room.

I have discovered that all human evil comes from this, man’s being unable to sit still in a room.

Faith is different from proof; the latter is human, the former is a Gift from God.

Time heals griefs and quarrels, for we change and are no longer the same persons. Neither the offender nor the offended are any more themselves.

The eternal silence of these infinite spaces frightens me.

Jesus is the God whom we can approach without pride and before whom we can humble ourselves without despair.

People are usually more convinced by reasons they discovered themselves than by those found by others.

We know the truth, not only by the reason, but also by the heart.

The least movement is of importance to all nature. The entire ocean is affected by a pebble.

The strength of a man’s virtue should not be measured by his special exertions, but by his habitual acts.

It is the fight alone that pleases us, not the victory.

Men are so necessarily mad, that not to be mad would amount to another form of madness.

Eloquence is a painting of the thoughts.

Can anything be stupider than that a man has the right to kill me because he lives on the other side of a river and his ruler has a quarrel with mine, though I have not quarrelled with him?

“The greater intellect one has, the more originality one finds in men. Ordinary persons find no difference between men.”
— Blaise Pascal, Pensees

“The mind must not be forced; artificial and constrained manners fill it with foolish presumption, through unnatural elevation and vain and ridiculous inflation, instead of solid and vigorous nutriment.”
— Blaise Pascal, The Art of Persuasion

“Curiosity is only vanity. We usually only want to know something so that we can talk about it.”
— Blaise Pascal, Pensees

Our notion of symmetry is derived form the human face. Hence, we demand symmetry horizontally and in breadth only, not vertically nor in depth.

When we encounter a natural style we are always surprised and delighted, for we thought to see an author and found a man.

Everything that is written merely to please the author is worthless.

I cannot judge my work while I am doing it. I have to do as painters do, stand back and view it from a distance, but not too great a distance. How great? Guess.

All err the more dangerously because each follows a truth. Their mistake lies not in following a falsehood but in not following another truth.

Perfect clarity would profit the intellect but damage the will.

To deny, to believe, and to doubt well are to a man as the race is to a horse.

Nature is an infinite sphere of which the center is everywhere and the circumference nowhere.

We arrive at truth, not by reason only, but also by the heart.

When the passions become masters, they are vices.

Men despise religion; they hate it, and they fear it is true.

Religion is so great a thing that it is right that those who will not take the trouble to seek it if it be obscure, should be deprived of it.

It is not certain that everything is uncertain.

We are so presumptuous that we should like to be known all over the world, even by people who will only come when we are no more. Such is our vanity that the good opinion of half a dozen of the people around us gives us pleasure and satisfaction.

The sole cause of man’s unhappiness is that he does not know how to stay quietly in his room.

Reason’s last step is the recognition that there are an infinite number of things which are beyond it.

Through space the universe grasps me and swallows me up like a speck; through thought I grasp it.

Let no one say that I have said nothing new… the arrangement of the subject is new. When we play tennis, we both play with the same ball, but one of us places it better.

The excitement that a gambler feels when making a bet is equal to the amount he might win times the probability of winning it.
N Rose Mathematical Maxims and Minims (Raleigh N C 1988).
Reason is the slow and tortuous method by which these who do not know the truth discover it. The heart has its own reason which reason does not know.

Reverend Fathers, my letters did not usually follow each other at such close intervals, nor were they so long…. This one would not be so long had I but the leisure to make it shorter.
Lettres provinciales.
The last thing one knows when writing a book is what to put first.

[I feel] engulfed in the infinite immensity of spaces whereof I know nothing, and which know nothing of

There is almost nothing right or wrong which does not alter with a change in clime. A shift of three degrees of latitude is enough to overthrow jurisprudence. One’s location on the meridin decides the truth, that or a change in territorial possession. Fundamental laws alter. What is right changes with the times. Strange jutice that is bounded by a river or mountain! The truth on this side of the Pyrenees, error on the other.

Let us weigh the gain and the loss in wagering that God is. Let us consider the two possibilities. If you gain, you gain all; if you lose, you lose nothing. Hesitate not, then, to wager that He is.

Look somewhere else for someone who can follow you in your researches about numbers. For my part, I confess that they are far beyond me, and I am competent only to admire them.

The more I see of men, the better I like my dog.

The more intelligent one is, the more men of originality one finds. Ordinary people find no difference between men.

However vast a man’s spiritual resources, he is capable of but one great passion.

There are two types of mind … the mathematical, and what might be called the intuitive. The former arrives at its views slowly, but they are firm and rigid; the latter is endowed with greater flexibility and applies itself simultaneously to the diverse lovable parts of that which it loves.

Nature is an infinite sphere, whose centre is everywhere and whose circumference is nowhere.

I have made this letter longer than usual, because I lack the time to make it short.
All man’s troubles come from not knowing how to sit still in one room.