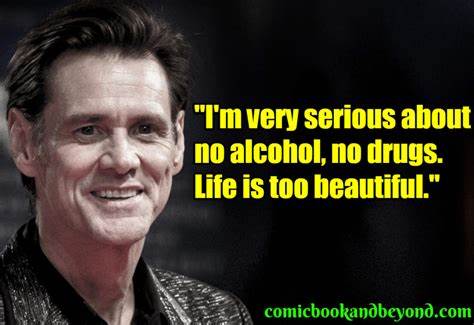 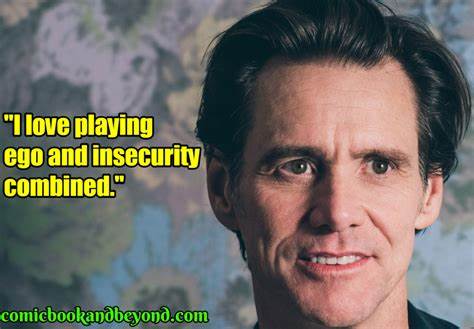 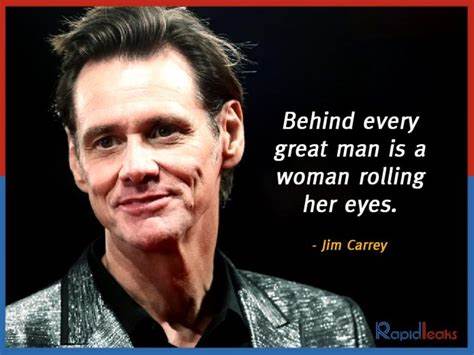 “I don’t believe in bad people. I believe that people, somewhere inside, have the potential to realize themselves.”
— Jim Carrey

“Life opens up opportunities to you, and you either take them or you stay afraid of taking them.”
— Jim Carrey

“What I do as an art form is try to make people feel good and if I do try to make them feel bad, it’s for a reason. There’s something I am trying to say.”
— Jim Carrey

“I just want to be myself.” – Jim Carrey

“That’s the trouble with being me. At this point, nobody gives a damn what my problem is. I could literally have a tumor on the side of my head and they’d be like, ‘Yeah, big deal. I’d eat a tumor every morning for the kinda money you’re pulling down.’” – Jim Carrey

“Maybe other people will try to limit me but I don’t limit myself.” – Jim Carrey

“I tend to stay up late, not because I’m partying but because it’s the only time of the day when I’m alone and don’t have to be performing.” – Jim Carrey

“Morgan Freeman is so class. He’s so cool. He’s so scary.” – Jim Carrey

“It’s nice to finally get scripts offered to me that aren’t the ones Tom Hanks wipes his butt with.” – Jim Carrey

“People need motivation to do anything. I don’t think human beings learn anything without desperation.” – Jim Carrey

“I’m the first to admit this whole salary thing is getting out of control. In the final analysis, it’s still about the work.” – Jim Carrey

“I got a lot of support from my parents. That’s the one thing I always appreciated. They didn’t tell me I was being stupid; they told me I was being funny.” – Jim Carrey

“I practiced making faces in the mirror and it would drive my mother crazy. She used to scare me by saying that I was going to see the devil if I kept looking in the mirror. That fascinated me even more, of course.” – Jim Carrey
If you’re enjoying these quotes, you’ll love our collection of mirror quotes that will change your perception.

“Life is an ordeal, albeit an exciting one, but I wouldn’t trade it for the good old days of poverty and obscurity.” – Jim Carrey

“I don’t think human beings learn anything without desperation. Desperation is a necessary ingredient to learning anything or creating anything. Period. If you ain’t desperate at some point, you ain’t interesting.” – Jim Carrey

“If you aren’t in the moment, you are either looking forward to uncertainty, or back to pain and regret.” – Jim Carrey

“Maybe there is no actual place called hell. Maybe hell is just having to listen to our grandparents breathe through their noses when they’re eating sandwiches.” – Jim Carrey

“Flowers don’t worry about how they’re going to bloom. They just open up & turn toward the light & that makes them beautiful.”
— Jim Carrey

“I like challenges and I don’t believe in failure. I don’t believe in regrets. I believe suffering, failure – all those concepts – are things that are absolutely necessary to make us the best people that we can be, the best at whatever we want to do.”
— Jim Carrey

“You might as well take a chance on doing what you love.”
— Jim Carrey

“I love the idea that ‘a person is a person no matter how small’.”
— Jim Carrey

“When you are a kid, you need to have something to do. This will keep you off the streets.”
— Jim Carrey

“Behind every great man is a woman rolling her eyes.”
— Jim Carrey

“The combination of what’s written and just being in the moment is always the best way. You gotta start out with something solid and then you play.”
— Jim Carrey

“I think everybody should get rich and famous and do everything they ever dreamed of so they can see that it’s not the answer.”
— Jim Carrey