About Mahatma Gandhi Quotes “Mohandas Karamchand Gandhi was an Indian lawyer, anti-colonial nationalist and political ethicist who employed nonviolent resistance to lead the successful campaign for India’s independence from British rule, and to later inspire movements for civil rights and freedom across the world. Wikipedia 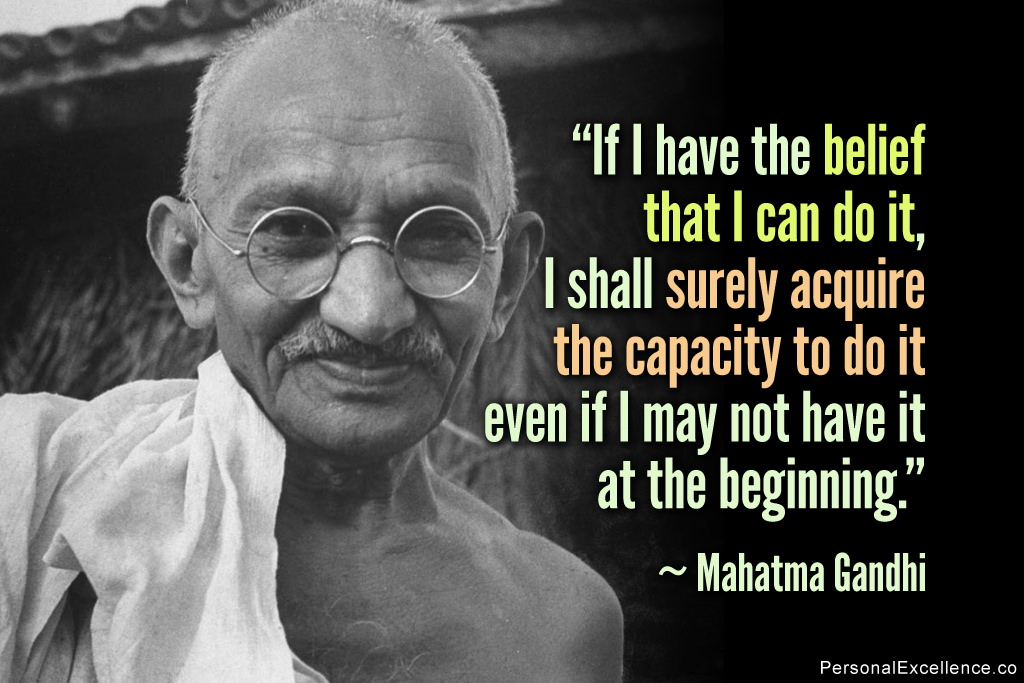 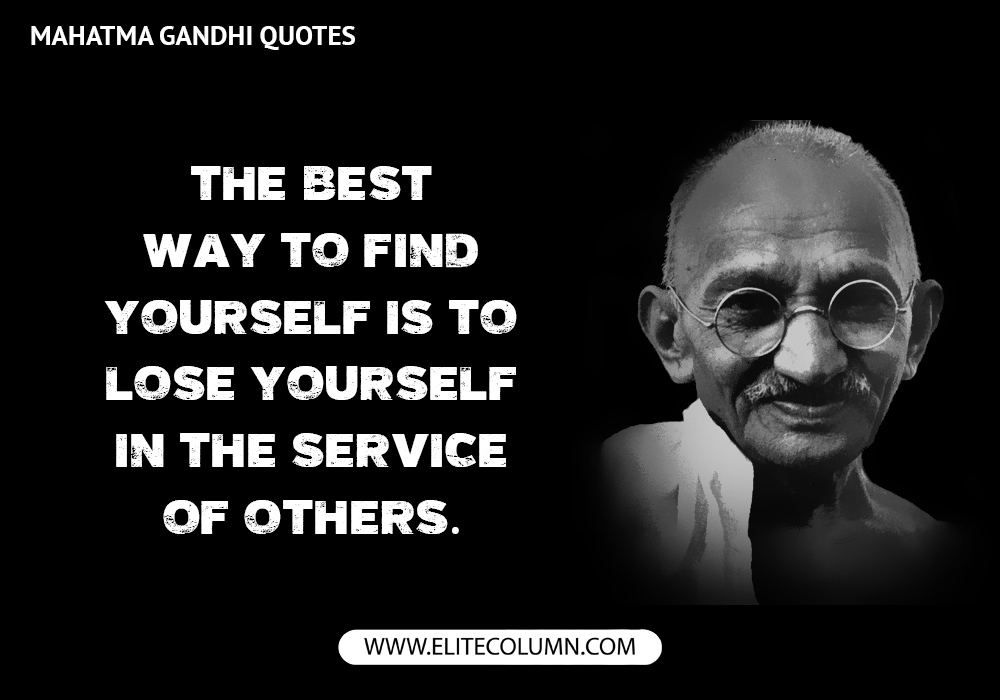 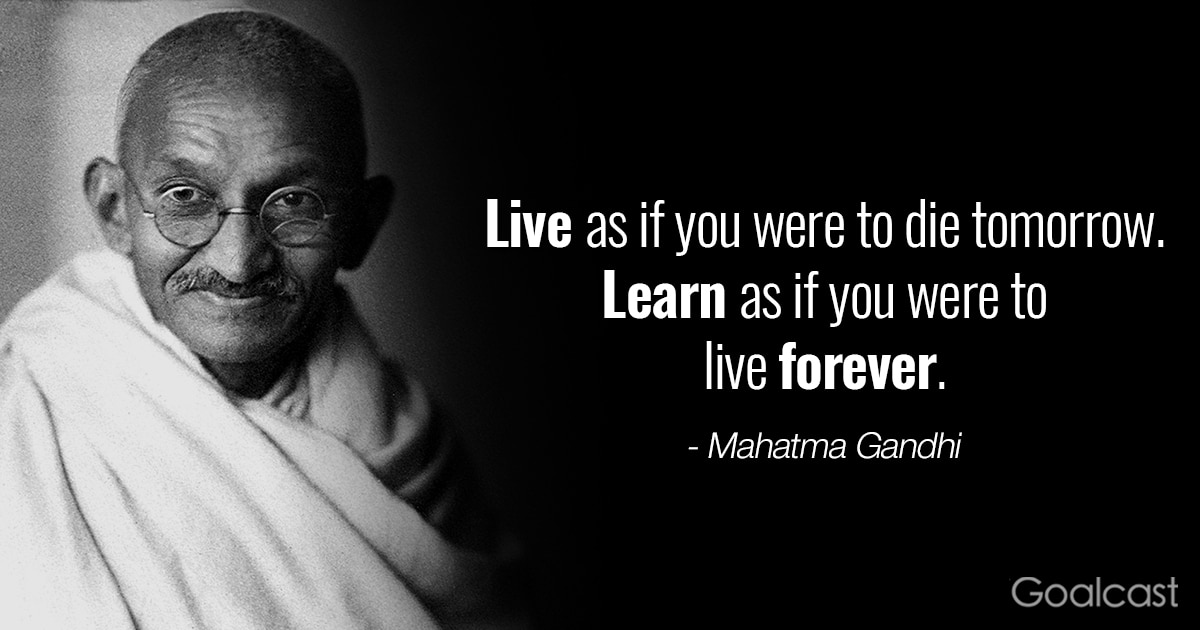 “Imitation is the sincerest flattery.”

“In a gentle way, you can shake the world.”

“I suppose leadership at one time meant muscles; but today it means getting along with people.”

“In matters of conscience, the law of the majority has no place.”

“My life is my message.”

“Nobody can hurt me without my permission.”

“Satisfaction lies in the effort, not in the attainment, full effort is full victory.”

“There is more to life than increasing its speed.”

“Truth stands, even if there be no public support. It is self-sustained.”

“A man is but the product of his thoughts what he thinks, he becomes.”

“A man who was completely innocent, offered himself as a sacrifice for the good of others, including his enemies, and became the ransom of the world. It was a perfect act.”

“Action is no less necessary than thought to the instinctive tendencies of the human frame.”

“Always aim at complete harmony of thought and word and deed. Always aim at purifying your thoughts and everything will be well.”

“An ounce of practice is worth more than tons of preaching.”

“Ours is not a drive for power, but purely a nonviolent fight for
India’s independence.”

“A non-violent soldier of freedom will covet nothing for himself,
he fights only for the freedom of his country.”

“Truth alone will endure, all the rest will be swept always in the
tide of Time.”

“I believe that in the history of the world, there has not been a
more genuinely democratic struggle for freedom than ours.”

“I am a worshipper of the cow. I believe the cow and myself to be
the creation of the same God, and I am prepared to sacrifice my
life in order to save the cow.”

“In Satyagraha, there is no place for fraud or falsehood, or any
kind of untruth. Fraud and untruth today are stalking the world. I
cannot be a helpless witness to such a situation.”

“Here is a mantra, a short one that I give you. You may imprint it
on your hearts and let every breath of yours give expression to it.
The mantra is: ‘Do or Die’. We shall either free India or die in the
attempt; we shall not live to see the perpetuation of our slavery.”

“Forsake friends, wife and all; but testify to that for which you
have lived and for which you have to die. I want to live my full
span of life. And for me I put my span of life at 120 years. By that
time India will be free, the world will be free.”

“I am not going to be satisfied with anything short of complete freedom. May
be, he (the Viceroy) will propose the abolition of salt tax, the drink evil. But I
will say nothing less than freedom”.

Gandhi jee then followed up with the now famous exhortation Do or Die.
“Here is a Mantra, a short one that I give you. You may imprint it on your
hearts and let every breath of yours give expression to it. The mantra is Do
or Die. We shall either free India or die in the attempt; we shall not live to
see the perpetuation of slavery”.

“Let every Indian consider himself to be a free man.”

“Ours is not a drive for power, but purely a non-violent fight for India’s
independence.

“I believe that in the history of the world, there has not been a more
genuinely democratic struggle for freedom than ours.”

“In the democracy which I have envisaged, a democracy established by nonviolence, there will be equal freedom for all.”

“Everybody will be his own master. It is to join a struggle for such democracy
that I invite you today. Once you realize this you will forget the differences
between the Hindus and Muslims, and think of yourselves as Indians only,
engaged in the common struggle for independence”.

“Glory lies in the attempt to reach one’s goal and not in reaching it.”

“Satisfaction lies in the effort, not in the attainment, full effort is full victory.”

“The difference between what we do and what we are capable of doing would suffice to solve most of the world’s problem.”

“The moment there is suspicion about a person’s motives, everything he does becomes tainted.”

“To give pleasure to a single heart by a single act is better than a thousand heads bowing in prayer.”

“Unwearied ceaseless effort is the price that must be paid for turning faith into a rich infallible experience.”

“Anger and intolerance are the enemies of correct understanding.”

“Anger is the enemy of non-violence and pride is a monster that swallows it up.”

“Man should forget his anger before he lies down to sleep.”

Compassion, Love, and Heart
“A coward is incapable of exhibiting love; it is the prerogative of the brave.”

“Culture of the mind must be subservient to the heart.”

“In prayer it is better to have a heart without words than words without a heart.”

“Power is of two kinds. One is obtained by the fear of punishment and the other by acts of love. Power based on love is a thousand times more effective and permanent then the one derived from fear of punishment.”

““The greatness of a nation and its moral progress can be judged by the way its animals are treated.”

“The weak can never forgive. Forgiveness is the attribute of the strong.”

“There is a sufficiency in the world for man’s need but not for man’s greed.”

“We may have our private opinions but why should they be a bar to the meeting of hearts?”

“A ‘No’ uttered from the deepest conviction is better than a ‘Yes’ merely uttered to please, or worse, to avoid trouble.”

“Everyone who wills can hear the inner voice. It is within everyone.”

“It is any day better to stand erect with a broken and bandaged head then to crawl on one’s belly, in order to be able to save one’s head.”

“Nearly everything you do is of no importance, but it is important that you do it.”

“Strength does not come from physical capacity. It comes from an indomitable will.”

“The human voice can never reach the distance that is covered by the still small voice of conscience.”

“The only tyrant I accept in this world is the still voice within.”

“To believe in something, and not to live it, is dishonest.”

“An error does not become truth by reason of multiplied propagation, nor does truth become error because nobody sees it. “

“Confession of errors is like a broom which sweeps away the dirt and leaves the surface brighter and clearer. I feel stronger for confession.”

“I claim to be a simple individual liable to err like any other fellow mortal. I own, however, that I have humility enough to confess my errors and to retrace my steps.”

“I look only to the good qualities of men. Not being faultless myself, I won’t presume to probe into the faults of others.”