About Tom Holland Quotes “Thomas Stanley Holland is an English actor. An alumnus of the BRIT School for Performing Arts and Technology in London, he began his acting career on the West End stage in the title role of Billy Elliot the Musical at the Victoria Palace Theatre from 2008 to 2010. Wikipedia 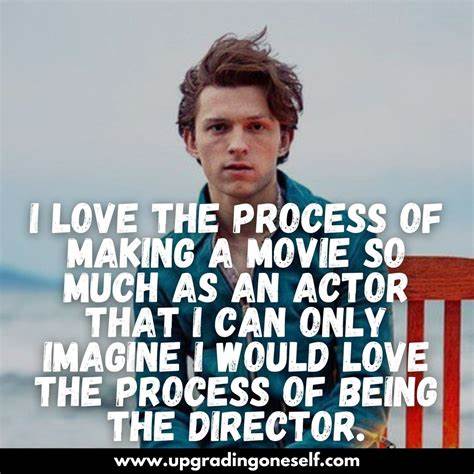 “I think, for me, I’ve realized the responsibility of being a role model for young kids everywhere.” – Tom Holland

“I think, from every actor I’ve ever spoken to, they say the biggest thing they regret from life is not finishing school.” – Tom Holland

“One of the reasons why Spider-Man is my favorite superhero is because we both undergo big changes in our lives.” – Tom Holland

“I am definitely the same person I was when I finished ‘The Impossible.’ That’s one of the things I really strive to keep.” – Tom Holland

“The harder you try, the better the impression you set on the people around you.” – Tom Holland

“I remember watching ‘Avengers 1’ for the first time and thinking, ‘God, one day I want to be in one of those movies.’ I just want to be in the movie.” – Tom Holland

“Marvel actually sent me to a school in the Bronx where I had a fake name, and I put on an accent, and I went for, like, three days. I basically had to go to this science school and blend in with all the kids, and some of the teachers didn’t even know.” – Tom Holland

“I was an ordinary student at school and, at the same time, an actor. But I was not the popular kid, which helped me to play Peter Parker better.” – Tom Holland

“The most important thing, in anything you do, is always trying your hardest, because even if you try your hardest and it’s not as good as you’d hoped, you still have that sense of not letting yourself down.” – Tom Holland

“You have a metal arm? That is AWESOME, dude!” — Spider-Man

“That thing doesn’t obey the laws of physics at all!” — Spider-Man

“You have the right to remain silent!” — Spider-Man

Spider-Man: Are those carbon-fiber wings?
Falcon: Is this stuff coming out of you?

Falcon: I don’t know if you’ve been in a fight before, but there’s usually not this much talking.
Spider-Man: All right, sorry. My bad.

Captain America: You got heart, kid. Where are you from?
Spider-Man: Queens!

Spider-Man: Hey guys, have you ever seen that really old movie, Empire Strikes Back?
War Machine: Jesus, Tony, how old is this guy?
Iron Man: I don’t know, I didn’t carbon date him. He’s on the young side.

“Hey, Happy! Um, here’s my report for tonight. I stopped a grand theft bicycle. Couldn’t find the owner, so I just left a note. Um… I helped this lost, old Dominican lady. She was really nice and bought me a churro. So I just, um, feel like I could be doing more. You know? Just curious when the next real mission is gonna be. So, yeah, just call me back. It’s Peter. Parker.” — Spider-Man

“Wait a minute… You guys aren’t the real Avengers! I can tell. Hulk gives it away.” — Spider-Man

Mr. Delmar: (In Spanish) His aunt is a beautiful Italian woman!
Peter Parker: (In Spanish) How’s your daughter?
16. Spider-Man: No one has actually told me why I’m in Berlin or what I’m doing. Something about Captain America going crazy.

Peter Parker: I’m sick of Mr. Stark treating me like a kid.
Ned Leeds: But you are a kid.
Peter Parker: Yeah. A kid who can stop a bus with his bare hands.

Spider-Man: You missed! You didn’t even hit me!
Vulture: Yeah, but then again… (cuts the building pillars) I wasn’t even trying to.
19. “So, to become an Avenger, are there like trials, or an interview.” — Spider-Man

Peter Parker: No, Spider-Man isn’t a party trick! I’m just gonna be myself.
Ned Leeds: Peter, nobody wants that!

“It’s very easy to relate to a kid who is having trouble in high school… less so to relate to a billionaire whose Lamborghini broke down.” – Tom Holland

“I’d like to be a director who gives my actors complete freedom while collaborating with them to find performances.” – Tom Holland

“I completely and utterly rely on my mum. Without my mum, I would not be anywhere at all. I’d literally just be a couch potato.” – Tom Holland

“My goal was to try and kind of be our generation’s Marty McFly. That was what my all-time goal was.” – Tom Holland

“Adrenaline has always been my thing.” – Tom Holland

“On stage you need to emphasize every emotion. But on screen you need to tone everything down and make it believable.” – Tom Holland

“There was times when I was bullied about dancing and stuff. But you couldn’t hit me hard enough to stop me from doing it.” – Tom Holland

“I don’t mind sitting at home playing the guitar for a year as long as I’m making good films.” – Tom Holland

“I personally think if something’s not a challenge, there’s no point doing it, because you’re not gonna learn much.” – Tom Holland

“As an actor, I love a challenge.” – Tom Holland

“Fame is a beast that you can’t control or be prepared for.” – Tom Holland

“I feel like if you put something out into the universe, then you increase your chances of it happening.” – Tom Holland

“When I’m acting, it’s like I am the character – no one can talk to me. But I’m not so method I’d sell my house and live on the street to play a tramp.” – Tom Holland

“My biggest flaw is probably my attention span or lack thereof. And while it might seem contradictory, my biggest strength is my work ethic.” – Tom Holland

“I have a photographic memory.” – Tom Holland

“When I’m on set, I don’t really think about what an audience is going to think about a scene. I’m just thinking about how I can make it best. And how I can enjoy myself most.” – Tom Holland

“I always wanted to be a stuntman. If acting went well and I was able to take a year out, I might train and get on the stunt register, which gives you qualifications so you can do more of your own stunts.” – Tom Holland

“I’m studying theater and media. I don’t really know why I took media, because I’m so useless with technology, though it’s fun. But, I do love theater and am having a great time learning about all the practitioners and getting to perform with my friends.” – Tom Holland