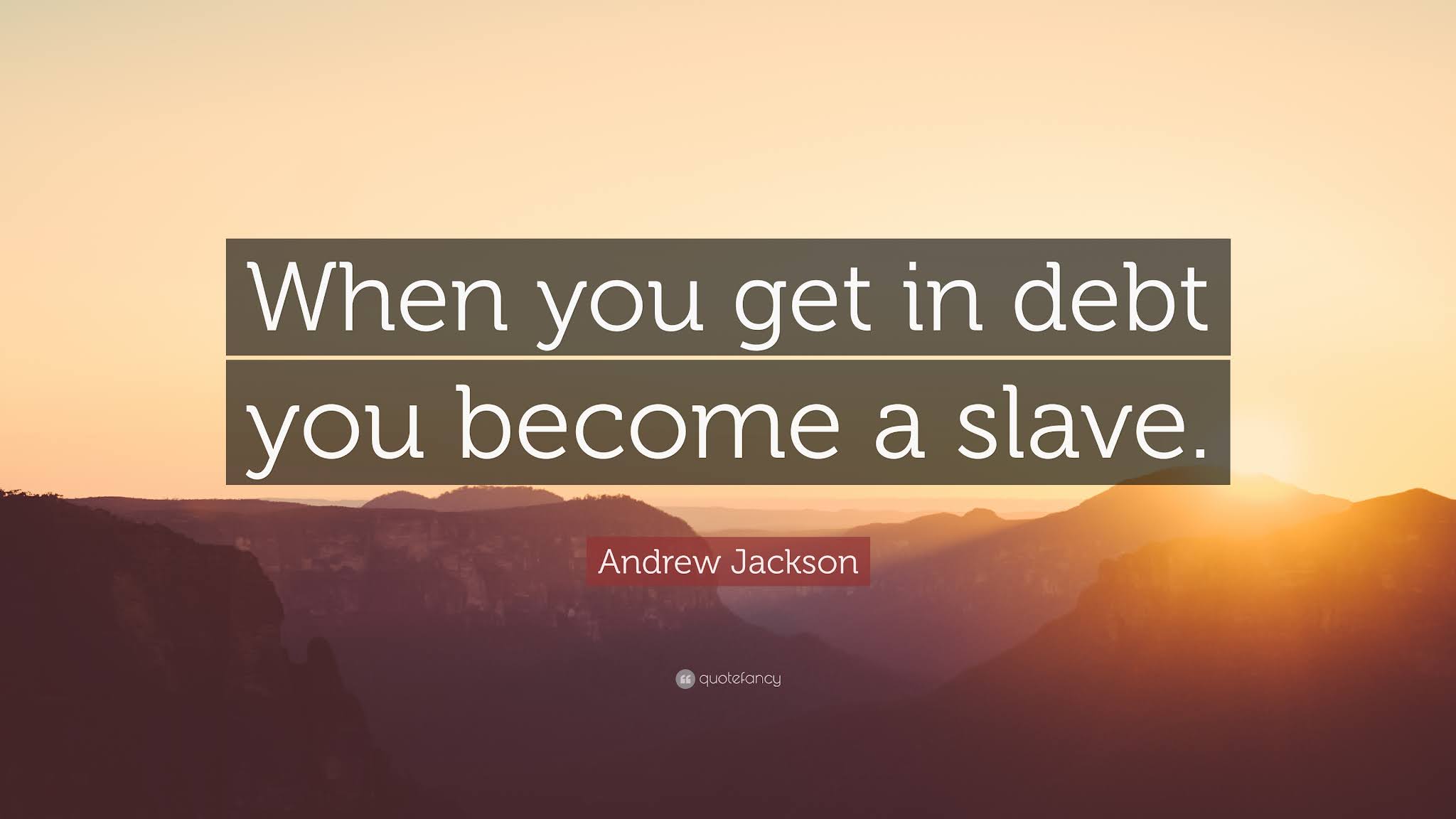 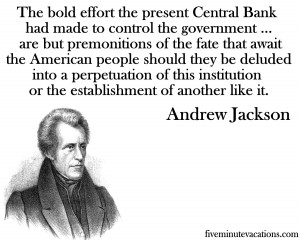 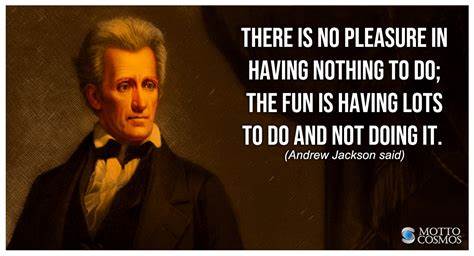 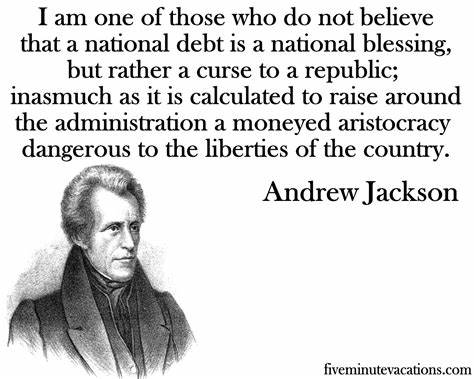 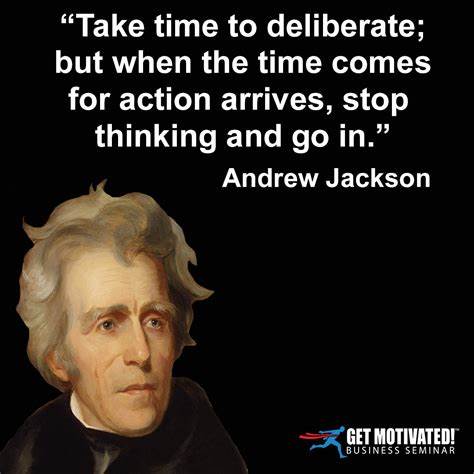 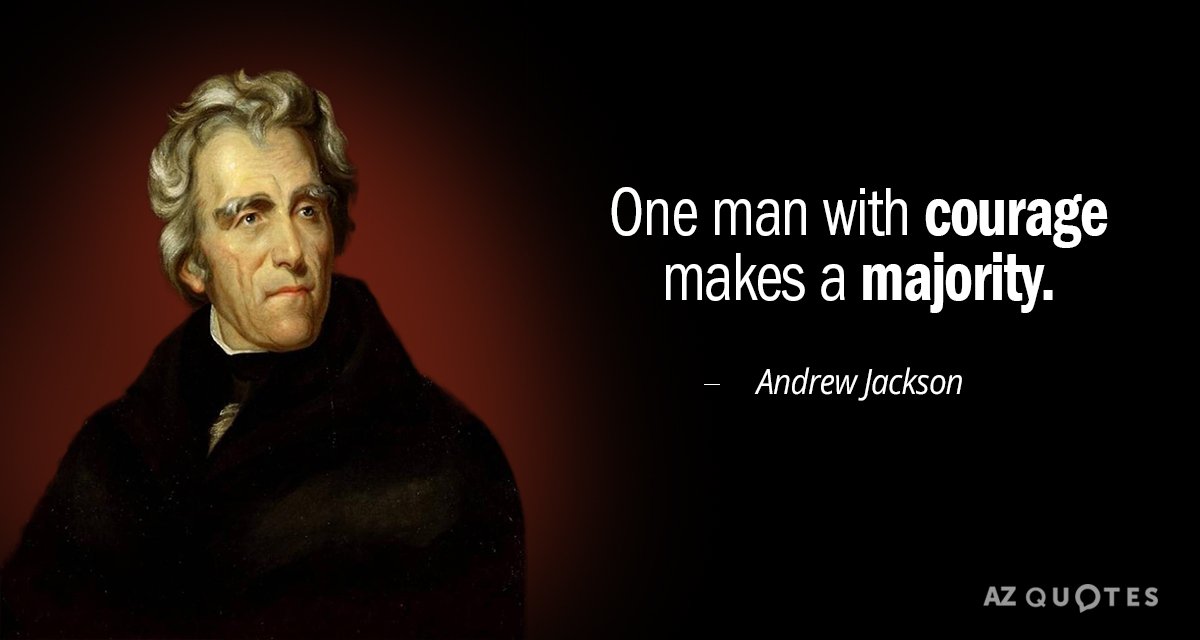 “After eight years as President I have only two regrets: that I have not shot Henry Clay or hanged John C. Calhoun.”
— Andrew Jackson

“You are a den of vipers. I intend to rout you out and by the Eternal God I will rout you out. If the people only understood the rank injustice of our money and banking system, there would be a revolution before morning.”
— Andrew Jackson

“When you get in debt you become a slave.”
— Andrew Jackson

“You are a den of vipers and thieves. I intend to rout you out, and by the eternal God, I will rout you out.”
— Andrew Jackson

“I weep for the liberty of my country when I see at this early day of its successful experiment that corruption has been imputed to many members of the House of Representatives, and the rights of the people have been bartered for promises of office.”
— Andrew Jackson

“Give me a thousand Tennesseans, and I’ll whip any other thousand men on the globe!”
— Andrew Jackson

“John Calhoun, if you secede from my nation I will secede your head from the rest of your body.”
— Andrew Jackson

“Heaven will be no heaven to me if I do not meet my wife there.”
— Andrew Jackson

“There is no pleasure in having nothing to do; the fun is having lots to do and not doing it.”
— Andrew Jackson

“When the time for action arrives, stop thinking and go in.”
— Andrew Jackson

“But you must remember, my fellow-citizens, that eternal vigilance by the people is the price of liberty, and that you must pay the price if you wish to secure the blessing.”
— Andrew Jackson

“There are only two things I can’t give up; one is coffee and the other is tobacco.”
— Andrew Jackson

“Live within your means, never be in debt, and by husbanding your money you can always lay it out well.”
— Andrew Jackson

“I do not forget that I am a mechanic. I am proud to own it. Neither do I forget that the apostle Paul was a tentmaker; Socrates was a sculptor; and Archimedes was a mechanic.”
— Andrew Jackson

“The brave man, inattentive to his duty, is worth little more to his country than the coward who deserts her in the hour of danger.”
— Andrew Jackson

“The Supreme Court has made its decision, now let them enforce it.”
— Andrew Jackson

“There are no necessary evils in government. Its evils exist only in its abuses. If it would confine itself to equal protection, and, as Heaven does its rains, shower its favors alike on the high and the low, the rich and the poor, it would be an unqualified blessing.”
— Andrew Jackson

“I have never in my life seen a Kentuckian who didn’t have a gun, a pack of cards, and a jug of whiskey.”
— Andrew Jackson

“Internal improvement and the diffusion of knowledge, so far as they can be promoted by the constitutional acts of the Federal Government, are of high importance.”
— Andrew Jackson

“There are no necessary evils in government. Its evils exist only in its abuses.”
— Andrew Jackson

“All the rights secured to the citizens under the Constitution are worth nothing, and a mere bubble, except guaranteed to them by an independent and virtuous Judiciary.”
— Andrew Jackson

“In a free government, the demand for moral qualities should be made superior to that of talents.” (from a rough draft of his Inaugural Address)

“It will be my sincere and constant desire to observe toward the Indian tribes within our limits a just and liberal policy, and to give that humane and considerate attention to their rights and their wants which is consistent with the habits of our Government and the feelings of our people.” (from Jackson’s First Inaugural Address, March 4, 1829)

“The bank, Mr. Van Buren, is trying to kill me. But I will kill it.” Three days later, Jackson announced his veto of the bank charter.

Though Dickinson shot first and hit Jackson squarely in the chest, nearly killing him, Old Hickory calmly took his shot as if he had not been wounded at all. When a friend expressed his astonishment at Jackson’s composure, Jackson stated, “If he had shot me through the brain, sir, I should still have killed him.”

“Do they think that I am such a damned fool to think myself fit for President of the United States? No, sir; I know what I am fit for. I can command a body of men in a rough way, but I am not fit to be President.”

“I was born for a storm, and a calm does not suit me.”

“I try to live my life as if death might come for me at any moment.” Though that may have been true, he was also prepared to fight death tooth and nail. When an assassin tried to kill him in 1835, Jackson beat him in the face with his cane.

“It’s a damn poor mind that can think of only one way to spell a word.”

The day after Van Buren was elected president, Jackson took the time to reflect on his own presidency with a friend. When asked if he had any regrets about the last eight years, this was his response: “[That] I didn’t shoot Henry Clay and I didn’t hang John C. Calhoun.”

“John Calhoun, if you secede from my nation, I will secede your head from the rest of your body.” As The Week says, this one is unverified, but given Jackson’s character and relationship with Calhoun, it’s likely.

“It is to be regretted that the rich and powerful too often bend the acts of government to their own selfish purposes.”

“The wisdom of man never yet contrived a system of taxation that would operate with perfect equality.”

“Without union, our independence and liberty would never have been achieved; without union, they never can be maintained.” (Second Inaugural Address, March 4, 1833)

“There are no necessary evils in government. Its evils exist only in its abuses.” (message to the U.S. Senate regarding his veto of a proposed Bank of the United States, July 10, 1832)

“The individual who refuses to defend his rights when called by his Government deserves to be a slave, and must be punished as an enemy of his country and friend to her foe.” (Proclamation before he became president, declaring martial law in New Orleans during the War of 1812, December 2, 1814)

“The moment we engage in confederations, or alliances with any nation we may from that time date the downfall of our republic.” (Warning to John C. Calhoun who had announced to Congress that he was going to be attending a conference in Panama to improve relations and discuss the possibility of Northern intervention in Latin America, in 1828)

“The wisdom of man never yet contrived a system of taxation that would operate with perfect equality.” (Proclamation to the People of South Carolina, written by Edward Livingston and issued by Jackson on December 10, 1832, at the height of the Nullification Crisis)

These quotations have some evidence that they may have been used by Jackson, but cannot be verified.

“Any man worth his salt will stick up for what he believes right, but it takes a slightly better man to acknowledge instantly and without reservation that he is in error.” (also attributed to General Peyton C. March)

“One man with courage makes a majority.” (This is an old adage which was written by the 16th-century Scottish reformer John Knox, that may or may not have also been quoted by Jackson)

This quotation appears on the Internet as attributed to Jackson but without a citation, and it doesn’t sound like Jackson’s political voice. It could have been something he said in a private letter:

“I can say with truth that mine is a situation of dignified slavery.”